To book Tom for your next event,

Step back in time by dressing up as an Old West cowboy, pioneer woman, or saloon gal in authentic period attire. We can help you look the part.

Call Tom to schedule your own historical photo opp.

Tom has performed at events for:

and many, many more

Programs and Services For Your Next Event

Come enjoy as Tom makes history come alive
by providing "color" for your next event. 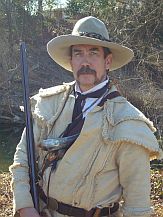 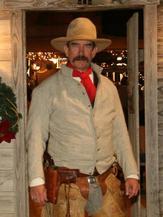 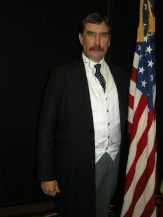 Tom can also provide the following services upon request.
He will appear as an authentic Texas folk hero. 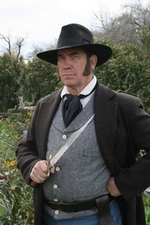 A 19th century American pioneer, soldier, smuggler, slave trader, and land speculator, Bowie played a prominent role in the Texas Revolution, culminating in his death at the Battle of the Alamo. Stories of him as a fighter and frontiersman, both real and fictitious, have made him a legendary figure in Texas history and a folk hero of American culture. 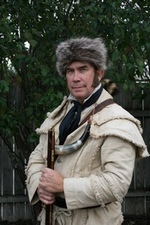 A 19thcentury American folk hero, frontiersman, soldier, and politician, Crockett is commonly referred to in popular culture by the epithet "King of the Wild Frontier". He served in the Texas Revolution and died at the Battle of the Alamo.

Come learn about some of the important figures and eras in history.

Tom will transport you back in time as he brings history to life. Come experience this educating and entertaining time trip as you have never experienced it before.

For a complete listing of available historical programs presented by Tom Jackson, click on the link.

Come experience an entertaining and engaging trip through history to learn why we Americans celebrate the "American Holiday" of Thanksgiving. Tom Jackson, dressed in period attire circa 1600, will explain how politics, religion, economics, war, and weather all factored into how, why, and when we celebrate "turkey day." 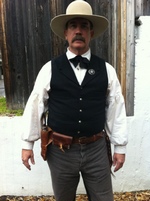 As the oldest police force in North America, created by Stephen F. Austin in 1823, the Rangers protected homesteads and communities from Indians and outlaws. Later, serving as scouts and irregular cavalry, they guarded the supply trains of the U.S. Army, eventually assisting various law enforcement agencies across the State, becoming a part of the Texas Department of Public Safety where they carry out a wide variety of tasks including the protection of the Governor of Texas.

A 19th century American lawyer and soldier, at the age of 26, Travis was a lieutenant colonel in the Texas Army. He was the commander of the defenders of the Alamo, where he died on March 6, 1836, during the Texas Revolution.